Why are people killing policemen in Uttar Pradesh so frequently?

“May I ask the government why this is happening so frequently these days?” he added, speaking on a day the police said 11 people had been arrested for the murder.

The undergraduate student thanked Adityanath for announcing compensations of Rs 40 lakh for his mother and Rs 10 lakh for his grandparents but added: “What will we do with the compensation money? The families of the slain policemen need an answer.”

Subodh was killed when a mob led by Sangh parivar activists rioted after the discovery of cow carcasses in a village. Trivedi was shot by a group of motorbike riders in a market, apparently after a row with an influential prisoner.

Reports, however, differ on how Vats was killed and who made up the mob. The FIR the police have registered says he was stoned to death, agreeing with what several eyewitnesses had said on Saturday.

But a police source in Lucknow who wouldn’t be quoted told this newspaper that Vats had “not been stoned but overpowered and beaten to death”, and several TV channels mentioned this as a possibility based on some eyewitness accounts.

The post-mortem report mentions a blow to the head with a brick as the cause of death, additional director-general of police P.V. Rama Sastry said, which allows both possibilities.

The Lucknow police source backed local officers’ claim that the mob was made up of members of a fringe political group, the Nishad Party, who erupted after being prevented from attending Modi’s rally.

But many eyewitnesses insist the mob was returning from the rally and was angry because the BJP, which had bused them to venue, had not arranged vehicles for the return journey.

Chhatrapati Nishad, a leader of the Nishad Party, backed this version, saying: “Our members were holding a dharna peacefully there; it was BJP members who got angry with their own leaders and became violent.”

The police source in Lucknow said the Nishad Party had sought permission for sit-ins at three places in Ghazipur on Saturday to press for a sub-quota for Nishads within the OBC quota, or the community’s inclusion within the Scheduled Castes.

“Their request was turned down because of the Prime Minister’s programme. Still, they tried to reach the rally venue in batches to air their demand, but were stopped by the police at several places,” he said.

“There was heavy traffic on the roads after the rally, with BJP workers and others returning. Vats was regulating traffic at the Kathwa crossing when a rumour spread about the arrest of Nishad Party leaders, and the mob started raining stones.”

But an eyewitness said: “The mob was stoning BJP members’ cars and not the police. A BJP leader asked Vats to control the mob. As he tried to do so, a brick hit him. He was then hit by dozens of stones and slumped to the ground.”

Sastry, the ADG, said: “We have registered cases against 32 named and 80 unidentified people for killing the policeman 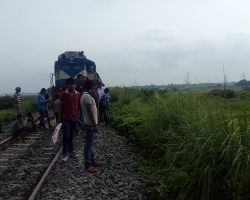